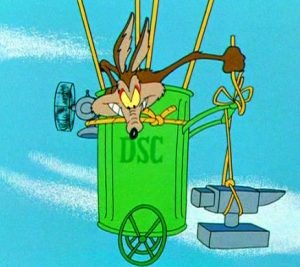 Strictly other people’s fags though – I wouldn’t dream of buying any of my own. (Have you SEEN the price of a pack of Marlboros?)

So essentially, I’m smoking on the odd occasion when I go out and find someone who is smoking, and who is prepared to give me a cigarette.

Hardly anyone smokes anymore though, with even fewer being prepared to share a commodity which costs more per ounce than solid gold, so I’m averaging about one cigarette a month.

If I’m honest, I don’t even like it. It tastes like shit and turns my brain into a waltzer. But! I can add it to the checklist of Reckless Things to do Since Sudden Death of Beloved Husband, and that is its one redeeming feature.

I find that I have stagnated at a confusing intersection on this journey. I am terrified of boarding a plane for fear of dying, yet I’m beating my liver into submission on a nightly basis with red wine. I catastrophise the potential for danger in EVERYTHING my daughter does (Look out! Falling Acme anvil!), yet feel like fucking the first man I meet.

In short, I am wilfully tap-dancing around the edge of oblivion and at the same time I’m scared shitless of my own shadow.

To an extent, I have always had this contradiction in my personality. But since M’s death, the two extremes have polarised further to a point where sometimes, I think I have regressed to my University days – the ones in which I would drunkenly ambush the lead singer of every band who played the Union and insist on taking over the mike. (Cringe!)

Anyway. Enough of this shit. My alter-ego wants to know if she can borrow one of your cigarettes?