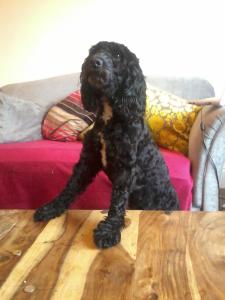 That’s him – the dirty protester.

The dog staged a dirty protest yesterday, all over my good rug.

Furthermore, I stepped in it, thus trailing shit and its offensive effluvium throughout the rest of the house.

And of course he had to choose that afternoon to defecate indoors; the afternoon that I had invited  a crowd of mummies and their kids to come back to ours to make cookies. My one attempt to prove that I am a fun, interactive and creative parent, scuppered by a dog turd.

He knew he’d done a naughty. He looked at me from beneath his eyebrows, awaiting my reaction.

“Bad dog, Brucie!” I said, scrubbing at the rug as a row of repulsed mummies considered how they might politely tell me they no longer wished their children to make cookies in this shit-smeared midden.

But I forgave the perpetrator almost instantly.

Thing is, we have developed an understanding, he and I. We spend pretty much all of our time together. He was pissed off because I’d been out on a rare shopping day without him. His tiny brain had clearly been working overtime to come up with the worst possible offence in order to serve me right.

Since Mark died, Brucie has been a bed mate, a couch-cuddler, a sounding board, a reason to get out and walk for a mile each morning.

And the other day he showed me an act of compassion which proved he is capable of offering comfort too.

Caught out by an unexpected jag of grief, I found myself crumpled on the floor of my bedroom, howling in pain for my lost love.

The dog flattened himself down on the carpet nearby and watched. He continued his vigil for a couple of minutes, then something compelled him to intervene. He approached me and placed a paw on each of my shoulders. He then licked my eyes and nuzzled his head into my neck. I pulled him closer and we held each other until the moment passed.

He was probably only after a dog biscuit, (in which case – RESULT BRUCE!),  but the gesture merits my forgiveness for the dirty protest all the same.

Sam is capable of using his own abilities, even if this is something his host normally can not do. Taken from the Season 4 episode “The Wrong Stuff” (Photo credit: Wikipedia)

Widowhood feels like that programme from the 80s, Quantum Leap.

When that bloke arrives in a new world feeling like himself, only to look in the mirror to find he’s now a naughty nun.

Like learning how to live again, widowhood presents a series of ‘firsts’ and new choices. All to be dealt with whilst fighting off the grief gremlin who is clinging to your back  – yeah, Dr Sam Beckett, you didn’t have to deal with THAT added twist, did you?

Today, I had a ‘first’. Yes, seventeen months in. I thought I’d pretty much fielded all the balls in this ‘new normal’, but an emotional googly came at me today, threatening to deflate an otherwise glorious day.

You just knew something had to come along and shit on it.

And he did. Right at the end, as we were saying our goodbyes. Steve Duncan appeared on the periphery of my vision. (We’ll call him Steve Duncan, for that is his name).

Steve Duncan was an ex-colleague both M and I shared. We worked on a youth project together in Sunderland ten years ago and aside from a wild Hallowe’en party involving a Hulk mask and a bowl of vodka-laced gunk, I haven’t seen him since. Yet there he was, Steve bloody Duncan, now with blonde-haired child calling him daddy.

My blood instantly chilled. Steve Duncan wouldn’t know about M. He’d be over in a minute, asking me how things were, what I was up to, how was his old mate M? I could see him looking at me with that, “That is her, isn’t it?” half-smile expression on his face, poised for the approach.

It occurred to me that I had not yet had to deal with people who had known M, but who weren’t aware He was dead. I was confident that social media had covered this for me. But Steve Duncan had been out of the loop for so long, the news wouldn’t have reached him.

I gathered my child and my dog and scurried up the hill towards the car. When I looked at my reflection in the wing-mirror, it could well have been a naughty nun looking back at me.

Another experience in this strange new world.

Note on picture: WordPress suggested it as an accompaniment to this post. This baffled me at first – what combination of words could have prompted it? But then I realised that over the past four months, Wordpress has clearly come to know me better than I know myself. For that is exactly what I feel like. A chimp with a gun. Thanks WordPress! 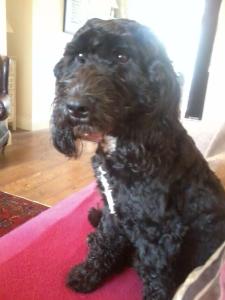 If only all men were as pleased to see me as my dog.

I came home earlier and there he was. In the window. With his waggly tail. And one of my daughter’s toys in his mouth, disembowelled and relieved of all its facial features.

Whenever I leave him, he takes his place on the back of the settee and stares out, waiting for the moment when I reappear. Sometimes I’ve only gone to the car and back, yet he greets me as if I’m Lord Lucan.

He spends his entire life waiting, actually. He’s sitting under my desk now as I type, waiting for a biscuit. He waits for walks, food, bed-time, up-time. In the year that I’ve had him, he has become utterly devoted to me and my every move.

In the first few months after M’s death, I spent much of my time waiting too. Like my dog in the window, I stared out, waiting for Him to return. Time marched on but still I waited. I wasn’t entirely sure what I was waiting for, as logic dictated that He wasn’t coming back. He hadn’t just nipped to the car. But still, I waited.

I realised today, when I returned home and saw the dog at the window, that I am no longer waiting.

I’m not sure when I stopped waiting. I still hold on to a brittle hope that somehow He’ll come walking round a corner – indeed, I fantasise about it: that He’ll materialise out of a crowd of shoppers, or step out of the woods while I’m on a walk.

But the waiting has ended. He’s not coming back.