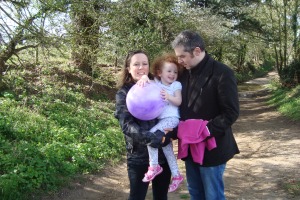 Weekends to widows are what weddings are to singletons.

But rather than trying to pair you off with the perennially single ‘old friend’, in widowhood everyone looks at you sidelong, hardly daring to ask how you’re going to fill that huge 48 hour void until work-time comes around again and they can stop feeling awkward about the fact that they’ve got heaps of fun stuff planned with their family.

This weekend I was mainly alone with my daughter. Unfortunately my mother (my weekday partner) has a life of her own, and sent me a text from somewhere on the Northumbrian coast to say she wouldn’t be home until tea-time on Sunday.

The void loomed. I tried to convince myself that it didn’t.

Hey, LOADS of parents are alone with their kids this weekend, it’s not just me! But the evidence suggested otherwise. Everywhere I went, kids with parents. Two of ’em, scurrying round after their progeny with ‘We Are Fam-i-ly’ as a backing track .

On Saturday, I tried to be a ‘good’ parent. I took us for a day out. We got accosted by nature do-gooders and I wound up with a membership to the Wildlife Trust.

Can I be honest here? The reason I did it was not for my love of squirrels, but because the kindly old man showed an interest in us and was nice to my daughter. He showed her a blackbird’s nest and woodpecker feathers. He was a grown, adult male and had engaged me in conversation.

“Family membership is it?” he asked, pen poised over the ‘family’ tick-box.

I kept the poor bastard chatting for twenty five minutes, and we were possibly the most grateful new recruits the guy had ever had.

Then came the evening. My daughter and I ate our meal. We went to bed, together, at 11 pm. She high on Toy Story, me low on booze.

And then … Sunday. With Mother not back ’til teatime, how would the day take shape? Friends stopped by. They asked me (sidelong) how I was planning to fill the day.

“My sister has asked us to go to the park!” I replied, gleefully.

Don’t worry, I wanted to say. I know this is awkward for you. But someone else has taken up the slack this time.

But next weekend, look out – it could be you!