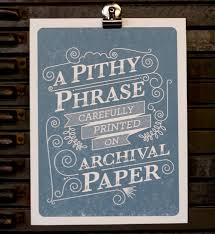 Many years ago I worked for a well-known chain of booksellers. The shop was in an out-of-town shopping mall near Bristol, and I once served Colin Jackson. (He bought the Guinness Book of World Records. Presumably to prove to his mother that he really was holder of the title for ‘Longest Peanut Throw’. No really, he was.)

The sales counter was always festooned with those irritating little books of quotations that are apt to be bought and then immediately misplaced behind the settee, and as booksellers we were required to promote them with each sale.

It always confounded me as to why anyone would buy these books. They seemed to contain nothing but a selection of mawkish quotes about life and love and ‘self-realisation’. Yet they were in perpetual need of being restocked.

Since Mark’s death, I have turned into the sort of person who would buy one. I have become a consumer of quotes and affirmations, one of those people who retweets schmaltz written in dreamy script set against an image of a tranquil Scottish loch.

Because in trying to make sense of Mark’s death, of its brutality and its unjustness, I have sought answers everywhere. But really, no-one knows what to say.

For example, I asked my Dad one night: “How can I ever accept this?”

Dad thought about this and poured himself another whisky. “You can’t because it is unacceptable,” he replied.

This is a man with a PhD and a good line in advice, whose word I tend believe more than any other. Yet when it came to sudden death, he was as clueless as everyone else.

Quotations are comforting in bereavement, even the twee ones, because they are proof that someone has been there before; and by consequence reach out to those of us who are stuck for words.

I’ll end with one I retweeted this week:

I keep myself busy with the things I do,
But every time I pause, I still think of you.