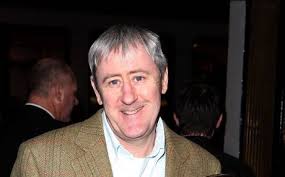 Up to now, the only ‘flashbacks’ I have experienced have been mainly based on the sphincter-clenching transgressions of youth; you know, being ushered off stage at a gig in the Student Union after drunkenly taking over the mike, or shouting ‘Eee, hiya Rodney!’ at Nicolas Lyndhurst as he came out of Pimlico Tube station during his serious acting phase.

This weekend, I experienced a flashback of the moment – the very moment – my husband died, and unlike a mere ‘memory’ of it, the flashback transported me to the bed in Mother’s house where He lay before me and I sat looking at Him wearing nothing but a cold shroud of disbelief.

The flashback accosted me on a single track country road in Shropshire of all places, where seconds earlier my only thoughts had been how glorious the weather was in this hitherto undiscovered county. Ergo, it had no place nor reason to suddenly confront me in the way it did. But it did, all the same.

I reacted the way I suppose most people who become reacquainted with a moment of extreme trauma do; by hyper-ventilating and threatening to be sick all over Shropshire’s ancient hedgerows.

Later, equilibrium restored, wine glass in hand, I found myself secretly frightened by the flashback. Unlike Rodney’s exit from the Tube, this was a genuine revival of the worst moment of my life, and it had the power to mentally and physically eviscerate me. And scarier still, it had come from nowhere.

Fortunately I had been in the company of a friend when it happened, but what if I had been alone, or worse, with my daughter?

Suddenly those transgressions of youth don’t seem so bad after all.